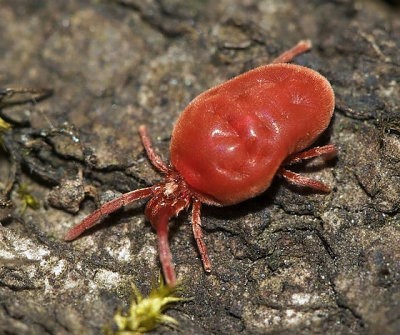 The most recent information suggests that there might well be a link between Harvest Mites and SCI (Seasonal Canine Illness).  With that in mind, I thought we’d take a look at what they are and what to do about them.

Harvest Mites (known as chiggers or berry bugs) appear, as the name suggests, around harvest time – ie late summer/early autumn.  Harvest Mites usually infest field mice but can also live on the surface of the dog’s skin, and feed on skin cell debris rather than burrowing under the surface.

The mites themselves are just visible to the naken eye and often appear as tiny red or orange dots and form clusters – hence their name “berry bugs”.

Treatment:
Various insecticidal preparations and shampoos can be used in the treatment of Harvest Mites, although some dogs may require treatment with anti-inflammatory medication as well.  It is usual for this type of mite to just “disappear” following the first frost in September.

A great non-chemical treatment that has been suggested is something called Neem Oil.  Neem oil on the coat can be an effective deterrent to various critters including ticks, fleas and mites as it has a very pungent, savoury odour.  It is, however, worth noting that if you intend to use your dog for breeding any time soon, this treatment should be avoided as the smell can be very off-putting for any would-be suiter!  Apparently in some parts of the world it is even used as a contraceptive!

Another great way of treating Harvest Mites, particularly if you favour non-chemical alternatives is Diatomaceous Earth (DE).  Ive added a blog all about DE and its many varied uses on another post but one of our followers, Sue Craigie of Imbaliridgebacks.co.uk sent me this message about using it for Harvest Mites.  Sue writes “One of my Ridgebacks had a Harvest Mite infestation and I cleared it up completely by rubbing DE (Diatomaceous Earth) into the affected areas. Within about a week the mites and sores had gone and her skin was back to normal.”