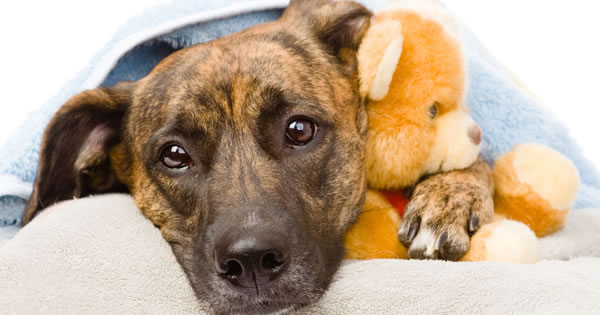 Vaginal Discharge & Pyometra:  Vaginal discharge is not actually a condition in itself, but rather the indication that something is wrong with either the reproductive tract or the urinary tract.  There are many possible causes for this problem:

* Uterine infection called pyometra – in bitches who have not been spayed.
(this is more likely to happen with older or middle-aged bitches)  Bitches who have been spayed can also suffer from what is known as “Stump pyometra”, where there is infection of the remaining stump of the uterus.

* Abortion, miscarriage or birth of puppies

* Endometritis (inflammation of the lining of the uterus)

* Ovarian cysts or ovarian cancer (both of which are rare)

* Infantile vulva (where the vulva is not protruding as far as would be considered normal, and the skin around it becomes sore with dermatitis – especially if the bitch is over-weight)

* Juvenile Vaginitis (seen in sexually immature bitches, before their first season).  This problem usually disappears by itself as the bitch matures.

* Normal secretion due to hormonal cycle in an unspayed bitch

* Hormonal cycle in a spayed bitch who has any fragment of ovarian tissue remaining.

You may be able to get an indication of the cause for the vaginal discharge from the symptoms you see associated with it:

Inflammation of the vagina
Change in shape, distortion or swelling of the vulva
Pink tissue protruding from the vagina
“Scooting” the rear end along the ground to scratch the irritation
Frequent licking of the area (if so, fit a Buster collar to avoid further irritation)
Cloudy discharge coming from the vulva
Yellowish or yellowy-red persistant vaginal discharge

If you are concerned about any of the above symptoms, you should see your vet.  Be aware that he is likely to ask you the following questions so remember to check out dates etc before you go:-

Pyometra literally means pus in the uterus.  It is a common and very serious disease of unspayed bitches and can occur several weeks after a season.  This condition often causes vaginal discharge which may be yellowish or red/brown in colour, although occasionally the bitch may be suffering from what is known as “closed pyometra” where the cervix is tightly closed and does not allow any drainage of pus to the extrerior)

Warning signs of pyometra to look out for are:

If your bitch has any vaginal discharge, it is always wise to have it checked out properly by a vet as leaving it could result in rupture of the uterus and life-threatening peritonitis and/or septicaemia if it proves to be a serious cause.