Bloat – Did we tempt fate? 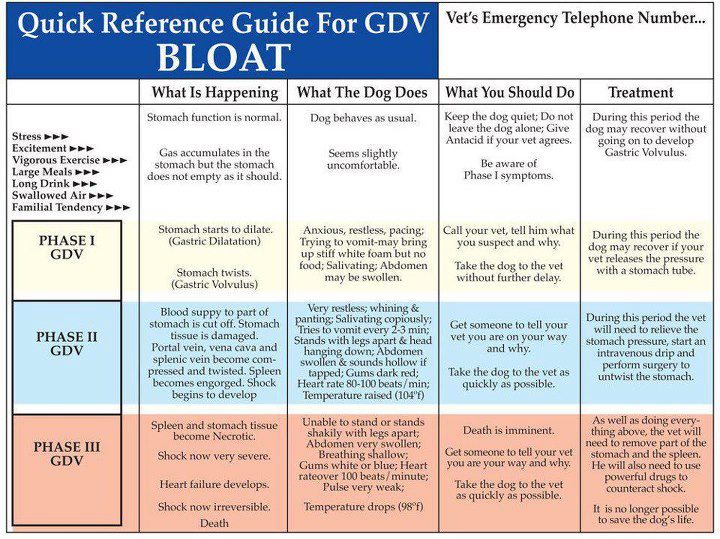 Bloat – Did we tempt fate?

So having posted about bloat again just this last week, last night I actually thought we had tempted fate. Axl was NOT a happy bunny.  Some three hours after his supper (9pm), he suddenly became very agitated, swallowing as if trying to stop himself being sick and shot out into the garden to eat grass (something he does when he needs to settle his stomach). After about 5 minutes, he came back in, wagging his tail and walking about but was clearly not his happy self and finding it difficult to settle.

Now at this point, just 15 minutes from the initial onset, it was unclear whether he merely had a little trapped wind and felt uncomfortable, or whether something more serious was going on. I decided to monitor the situation closely to see if things escalated at all in which case we would have had to go as an emergency to the vets.

I gave him a Deflatine (which is a type of wind relief tablet containing Simethicone – https://en.m.wikipedia.org/wiki/Simethicone) that I always have in my first aid kit – available over the counter in normal pharmacies.

Next, I felt his tummy which did seem a bit firmer than normal so I took a tape measure around his stomach and jotted down the time and the measurement so I would know if his tummy was becoming more distended – if it had blown up more, I would have gone immediately to the vet at that point. (Having a measurement and time frame to compare to some 5/10 minutes later is very reassuring because sometimes just looking can be deceptive) If the tummy becomes very distended and blown up, it would sound a little like a tight drum when tapped.

15 minutes later, as he lay beside me, unsettled, and shifting about, still breathing more quickly but not appearing to be getting any worse, he let out a big burp. Just the one, but it obviously did make a difference because he was then able to lie his head down and doze off for the rest of the evening. As he lay next to me, I monitored his breathing and heart rate which slowly began coming down as he slept and, by the time we were ready to go to bed, he looked a lot happier.

I gave him another tablet at bed time and within 15 minutes of going to bed, he “trumpeted” the most enormous sound you ever heard, sighed, and settled for the evening.

Axl is fine – so why am I telling you all this? Because it can and does happen to anybody no matter how careful you are, how healthy your dogs are and how much you know. All I can say is that I’m so relieved things worked out well for us and who knows, maybe it would never have escalated to anything more than an uncomfortable tummy, but I do firmly believe that being armed with the knowledge of what you are looking out for gives you the confidence to know when to make the call to your vet that could save their life. I know I was ready at the slightest sign that things were getting worse to ring – even if it was 11pm on a Sunday evening.

If you missed the blog I wrote on bloat, here it is: https://rhodes2safety.com/bloat/