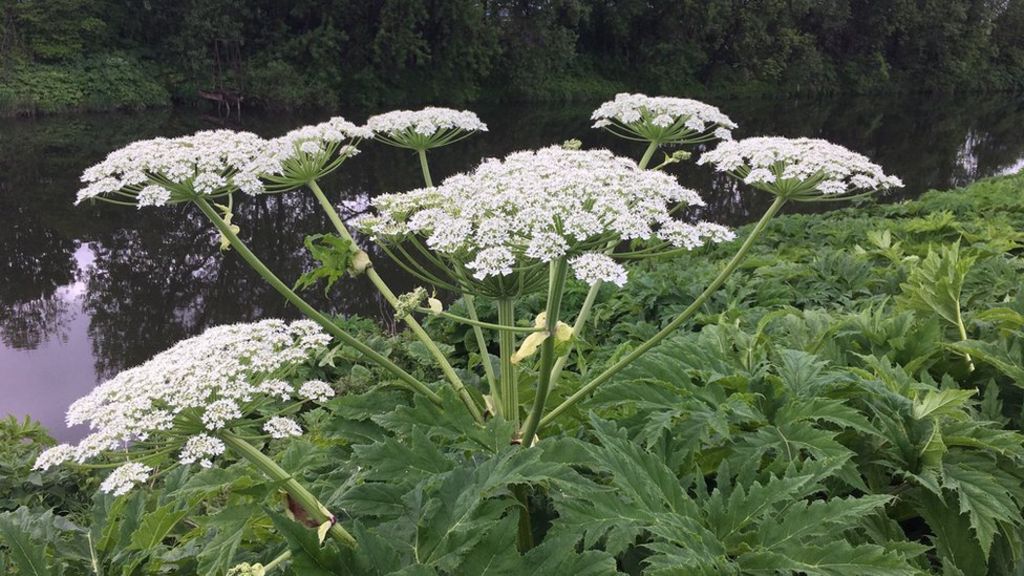 It has been said that Giant Hogweed or “Heracleum Mantegazzianum” to give it its posh name, could well be the UK’s most dangerous plant … and for good reason!  Simply brushing against this nightmare plant can cause enormous pain and problems for both humans and our furry friends as well.   I’m sure you have probably seen this plant before.  It grows usually along river banks and canals as this allows its seeds to be spread by the waterways.  Originating in central Asia, it was brought over to the UK in the 19th Century as an ornamental plant.  As is often the way, it escaped and is now found in the wild, native to the UK.

So what’s so dangerous about Giant Hogweed anyway?  Well, in short it is all about the toxic sap it contains – Furocoumaria.  This sap can cause severe light sensitivity to the surface of the skin and, when exposed to sunlight, can cause severe burning and blistering of the skin for many weeks, months or even years later.  If the sap gets into the eye, this has been known to cause temporary and, unfortunately in some cases, permanent blindness.

Giant Hogweed is just that …. Massive!  When fully grown it can be as tall as 1.5 to 5 meters high and have a spread of 1-2 meters.  It looks very similar to Cow Parsley with green stems that have purple blotches, stiff white hairs and leaves a little like that of a Rhubarb leaf.  The flowers which are small and white as a rule (they can be pink) are clustered on umbrella type heads, usually appearing in June and July.  Although the toxic sap runs throughout the entire plant, the stems and foliage are where it is most concentrated.

Often, the symptoms of coming into contact with Giant Hogweed won’t be immediately apparent.  However, as the skin is exposed to more sunlight, the light sensitivity will increase demonstrating burns, blistering, swelling and pain.  The scarring that results can be very disfiguring indeed with dark patches taking months to heal.

In the first few to 12 hours you may notice:

As this is a problem that can recur for weeks, months and even years, it is very important that any affected area be protected should the dog be going out in brighter sunlight.  Protection with sunblock should used to ensure the photo-sensitivity does not flare up and, if possible, such dogs should be kept out of direct sunlight between 10 am and 4 pm to ensure their safety.