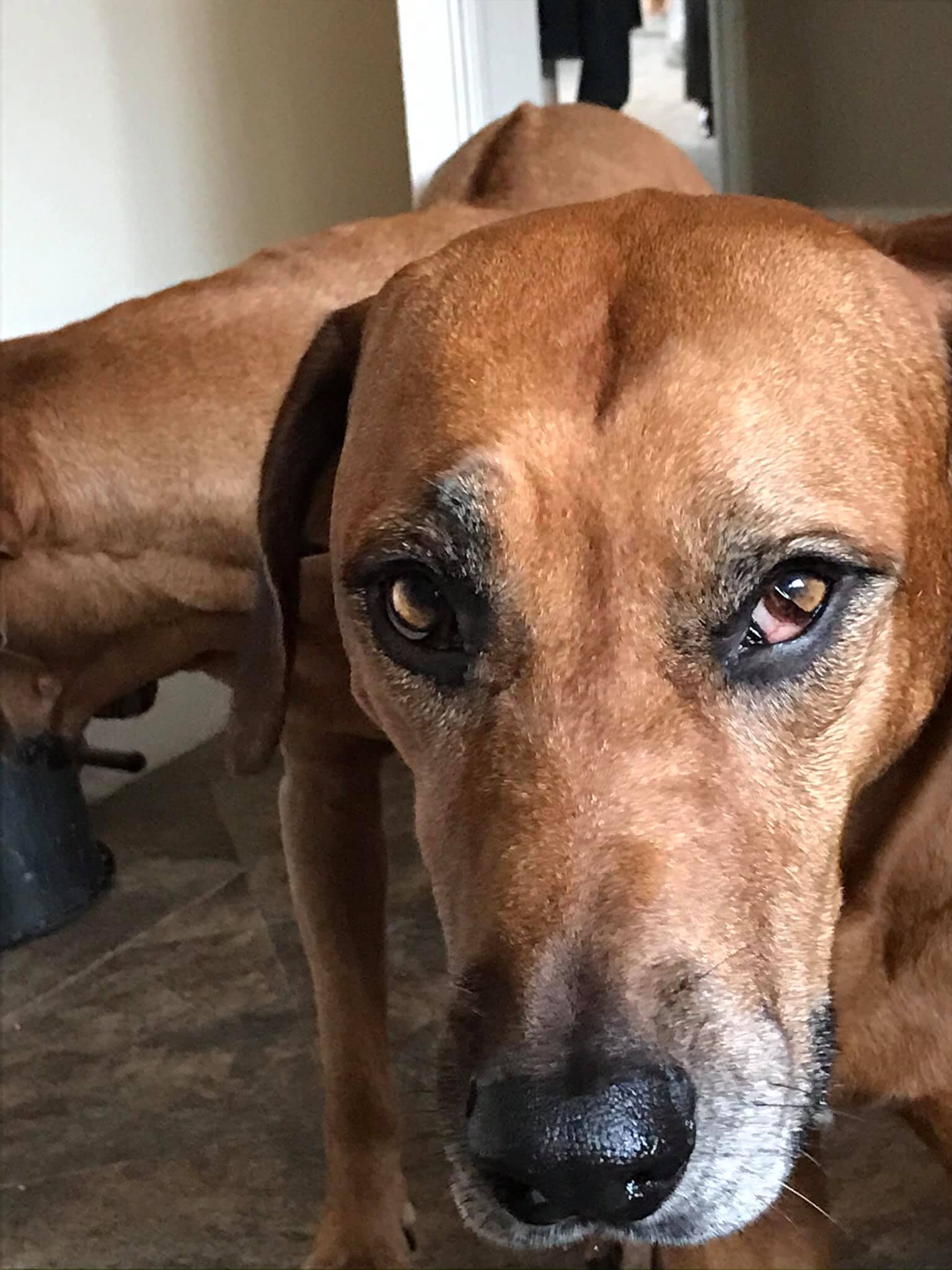 It has taken me every single moment of the last 6 weeks to be strong enough to put this blog together for you.  I say that because it was the key component to the downward spiral that eventually lead to the loss of my darling Chi.  I will try to write professionally and sensibly, but please indulge me if it feels a little to close to home.  Everything I write and document is purely for the betterment of your knowledge and hopefully a tiny glimmer of hope from a heart-breaking chapter.

6 weeks ago, Chi, my 7.5 year old Ridgeback, first aid partner in crime, son of Axl and total light of my life was fine and dandy – or so I thought.  We’d had an entirely normal day, with a normal walk, normal play and normal evening.  At 9 pm on Monday night, he woke from a nap and turned to look at me.  When he did, he just didn’t look “right”.  Something was off in his appearance as if his third eyelid wasn’t going back into its normal position.

I called him over to me so that I could have a look at him and as he got up, he limped very badly on the same side as the droopy eye – how very odd!  Prior to this, he had been totally fine and had exhibited no signs of any problems whatsoever but now, after a quick nap, he looked decidedly squinty and lame.

When two brand new symptoms happen with absolute synchronicity, and seemingly no outward cause, you have to suspect them to be connected.  By the Tuesday morning, he was still limping and still squinting.  I checked him over head to toe looking for an injury to shoulder, elbow, foreleg, toes … anything at all that would give me a clue, but he showed no outward signs of pain.  I was just about to give up on the exam when my fingers accidentally slipped inside his armpit, ever so gently as I stroked him.  He shrieked!  Wow … I did not expect that!  I had hardly touched him and yet his howl was that of an animal in excruciating pain.  So, an appointment was made for him to see our vet later that afternoon with my “home diagnosis” of Horner’s Syndrome but, try as the vet might, Chi refused to show any pain to him on examination, although he was still squinty and lame.

We decided to treat with pain killers and anti-inflammatories.  If it was something like an ear infection and pulled muscle, these should help with the pain and we should see a definite improvement.  If it got worse or didn’t start to improve by the following week, we were to proceed to x-rays to check him out more thoroughly.  However, the following day, he was clearly in more pain and more uncomfortable.  The meds were just not touching it, so the x-rays were brought forward and booked for the following day (Thursday) with a worrying consideration being given to the very real possibility of bone cancer.  The x-rays were done but these all came back clear – nothing to be seen skeletally and no signs of spread to the chest either.  I was delighted, thinking we had dodged a bullet.  It was decided that he should be referred to an orthopaedic specialist with a provisional diagnosis of a neurological issue.

On Friday morning (3.5 days after the initial symptoms), we arrived at the Specialists office – me still naively thinking it could be a trapped nerve in the spinal vertebra or perhaps an exploded disc (horrid, but operable).  Sadly, my hopes were dashed very quickly indeed as the consultant easily diagnosed a tumour of the brachial plexus (for those geeks among you, the brachial plexus is a network of nerves that extends from the spinal cord, through the cervicoaxillary canal in the neck, over the first rib, and into the armpit).

The options were either CT & MRI & amputation of the foreleg & then chemotherapy with a prognosis of a matter of months …….. or, Rainbow Bridge.  I could never subject my darling boy to that.  I couldn’t put him through the prodding, poking and being away from me, which he would have hated beyond words – only to have another couple of months, throughout all of which he would have been recovering from surgery and undergoing chemo.  I had to let him go.  We shared an emotional half an hour of hugs and cuddles and apologies and promises and then he fell asleep in my arms being told how much I loved him.  My darling boy was gone and there was not a damn thing that I could have done to change it.  I was, and am, devastated.

So here we are, 6 weeks on, me in floods of tears as I write and relive this, and still aching inside to have had to say goodbye so early to the sweetest, gentlest, golden lad – just two weeks after the birth of his first puppies who he never even got to meet.  But … if there can be anything at all to be salvaged from his passing, I will grab it with both hands and thus why I’m tell you all about Horner’s now.

Horner’s Syndrome doesn’t always mean your path will go like ours – in fact, it often resolves spontaneously without any intervention at all, but I’d like to tell you a little more about it because the more you know, the better prepared you are to act quickly and get treatment when you really need it.  Had I NOT have known what it was, I may have left him on lead/crate rest, dismissing the eye as tiredness and the limp as a pulled muscle.

If after pouring my heart out and destroying you all emotionally too, you are still reading, then this is the information you need about this Horner’s … courtesy of Chi, my ginger hero.

Firstly, let me say that Horner’s Syndrome is very common.  Its onset, as with Chi, can be very sudden and entirely unexpected.  This Syndrome is often classified as idiopathic, which simply means we are unsure of what the specific cause is.  (It is, however, very important to get to the bottom of it so that that underlying cause can be treated).

What is it?
It is a combination of signs and symptoms caused by a disruption of a nerve pathway that goes from the brain to the face and eye on one side.  Usually, you will only see signs on one side of the face but very rarely it can affect both sides if both hemispheres of the head are damaged.  This Syndrome can affect any breed and any age of dog, though it is perhaps a little more frequent in Golden Retrievers and Collie breeds.

Signs & Symptoms
Droopy eye lid
Third eye lid may look red, raised and coming partly across the eye.
There may be sinking of the eyeball on that side
Decreased pupil size on the affected side
You may notice increased salivation
You may notice the dog has difficulty eating on one side of his mouth.

Causes
There can be many causes but generally they are connected with injury to the sympathetic pathway through the chest and neck.  Those causes could be:

Other causes to consider would be infections to the eye, the middle or the inner ear – hence why this can be quite a common thing when we take into account the number of ear infections our floppy-eared dogs can have!

Examination
Although this Syndrome is one that will resolve spontaneously, we need to get to the bottom of the underlying cause and it is usual to opt for such procedures as:

Recovery
Recovery from the Syndrome itself is usually spontaneous taking anywhere from several weeks to around 4 months – provided that the cause is not pathological.  If there is no underlying pathology (such as a tumour for example) then the outlook is very positive indeed.