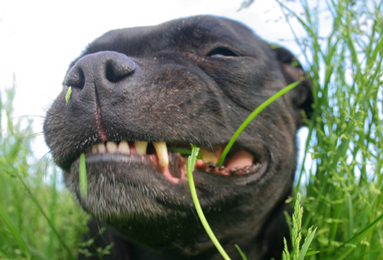 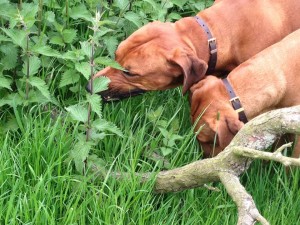 .
Three times recently I have been directly asked or overheard a conversation about this issue and then, totally by chance, I read a really interesting little snippet which sums it up beautifully.  This little chapter comes from Andrew Gardiner’s First Aid for Dogs book – An Owner’s Veterinary Guide which I found in a charity shop of all places! Anyway, I thought it was worthy of a mention purly from a point of interest.  Im sure many people may have varying opinions and views about this subject, but I did think this article was pretty good.
.
“Many dogs eat grass occasionally. It is not considered abnormal or signs of a major dietary deficiency, nor is it accurate to say that the dog is “trying to make himself sick”. Its true that some dogs will retch after consuming grass or tough stems, but by no means all do.

Wild dog relatives also eat grass and other vegetation; they will frequently eat the vegetable material present in the stomachs of their prey animals as well as nibble at growing grass and plants. The reason is thought to be a natural desire to obtain indigestible fibre (which is required for normal bowel function) in animals which, like dogs, are mainly carnivorous.

Feeding raw vegetables (eg carrots) occasionally may reduce the frequency of grass eating in some dogs which seem particularly keen on it.”

It is important also to consider HOW they are grazing.  If it is the normal nibbling and munching, then its simply down to the fact that they like and enjoy it.  If it is a frantic grabbing of the blades and ripping mouthfuls out of the ground, this is usually more indicative of a stomach upset and should be watched accordingly.  If the behaviour continues, then veterinary advice should be sought.

Often we see our dogs making a bee-line for fresh lush shoots and many owners report that their dogs have favourite patches of grass to graze on and I know my lot certainly do too, with all three of them munching for as long as they can before they have to run to catch me up on our walk. 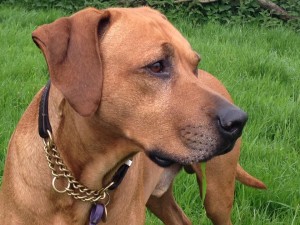 Perhaps this goes some way to explaining their constant fascination with eating horse, cow and sheep poo (or is that just my three???)  It is important to remember that while the eating of herbivorous animal poo in itself can be seen as quite normal, we do need to take care and discourage this if possible.  Not just because, well, frankly its all a bit bleughhhhhh, but also because of the dangers should the host animal have been wormed recently.  Horses, cows, sheep etc all get wormed regularly and if this has been done just prior to your dog tucking in to a steaming pile of “Poo au vin” then your pet will be ingesting the chemicals and worm infestation excreted by that animal.  Some dogs react very badly to certain types of pesticide and, in cases such as those dogs with the MDR1 genetic fault, this can actually prove fatal.

Another consideration is a drug called Monensin.  The MRCVS put out a new warning in 2015 stating that care should be taken “not allow dogs, horses, other equines or guinea fowl access to formulations containing monensin. Due to the risk of bolus regurgitation, do not allow these species access to areas where treated cattle have been kept. Ingestion or oral exposure to monensin can be fatal in these species.”

Further information about the symptoms of the effects of this drug can be found at: http://mrcvs.co.uk/en/news/14578/Vets-warned-of-monensin-toxicity-in-dogs