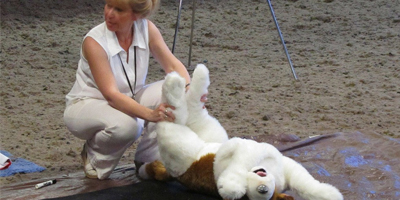 A month or so after attending one of the the fabulous Rhodes to Safety dog first aid courses I was running my 4 dogs on local parkland. Due to heavy rain there were huge flooded areas and the dogs were having a high old time chasing each other through them, one of the dogs Buster an old bull terrier with a heart condition suddenly stopped dead and seemed to have got stuck in the mud, I waded in an pulled him free and we then walked back to the car. It was only as I was drying him off with a towel that I noticed he was bleeding heavily from a deep gash from his chest to under his belly. I could see that the skin and muscle layer were cut, but then became very worried as the water had been filthy and risk of infection would be very high. He started to shiver and checking his gums I recognised that he was going into shock. I wrapped him up in all the dog blankets and rushed him to the vets. Wound was thoroughly cleaned, he was stitched up but most importantly the vet said I had averted shock which at his age and condition could have been fatal quite quickly.

Knowledge is a powerful thing 🙂

Kerry Rhodes says:
Well done Louise – another perfect example of how the simplest of actions can make all the difference in the world. Shock IS a killer and recognising it is so very important. Buster is very lucky to have you.