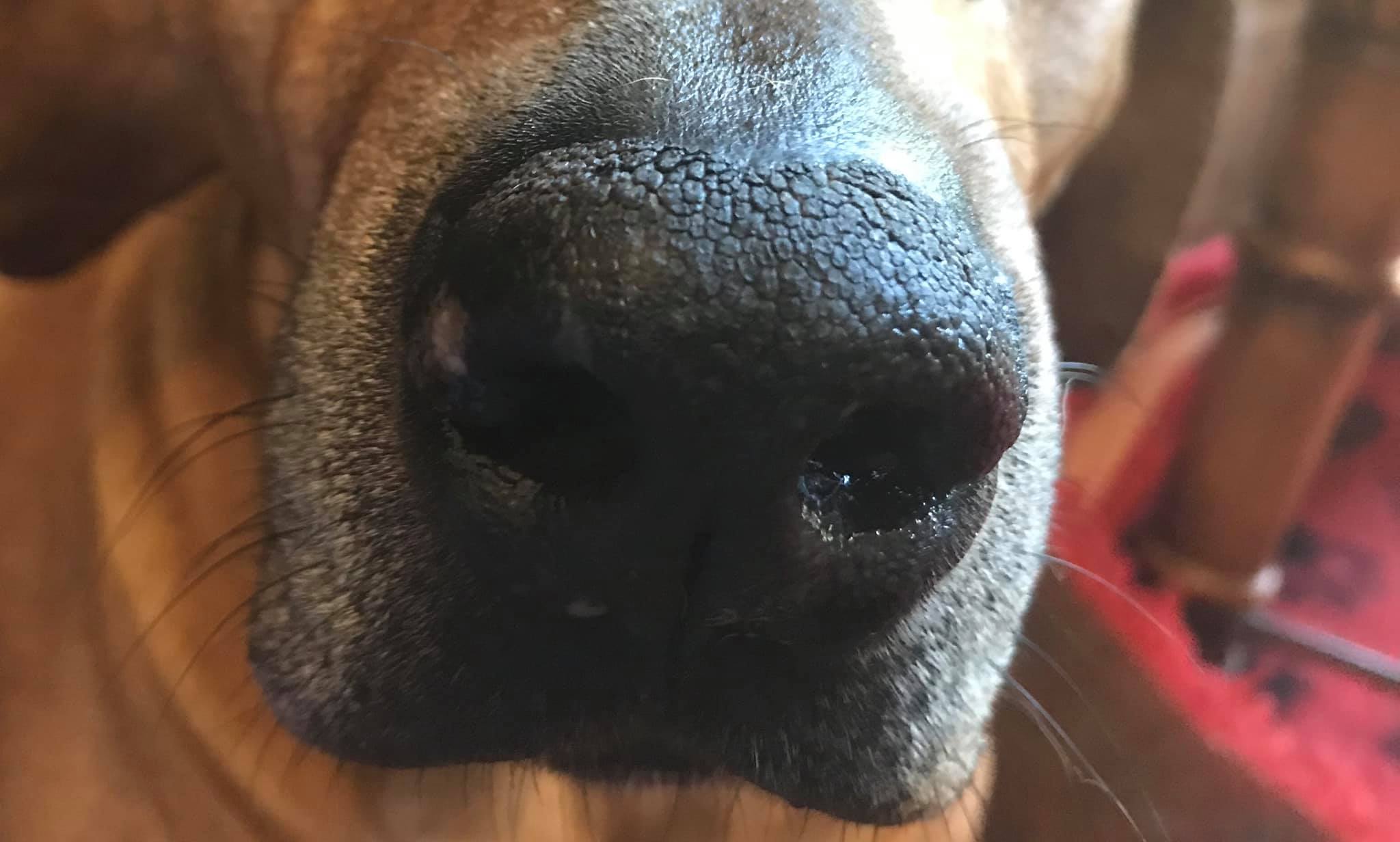 But what is REVERSE SNEEZING?

Reverse sneezing is actually a very common complaint, particularly in smaller and shorter faced (brachycephalic) breeds such as Pugs and Cavs rather than in long nosed breeds such as my breed, the Rhodesian Ridgeback for example.  However, it can occur in all breeds of dogs (much less so in cats), so if you notice your dog doing this, please don’t panic. It is generally not a concern at all and can happen at any time in the dog’s life – sometimes frequently and sometimes just as a one-off event.  Reverse sneezing is characterised by the dog taking repeated sharp intakes of breath, through the nose, with a very raspy sound and often with the cheeks pulled back in a kind of grimace expression.

It is usually caused by an irritation in the nasal or sinus cavity, which in turn causes the dog to inhale sharply to try to dislodge any mucus that is irritating him. It might be something in the atmosphere such as dust, or due to the season such as pollen, or even down to something as simple as changing your pillows to a feather variety that could set him off.  (I am citing feathers because I had exactly this with my old Labrador, Amber).  It can also be triggered by pressure from the collar if your dog pulls on his lead, from over excitement and, in some cases, exercise.  If pulling on his collar is the trigger, then the best plan is simply to have the dog on a harness to avert it happening in the first place.

If it is an allergy that is setting him off, then try to remove the dog from the environment or trigger causing the problem.  In some cases, and provided the your vet has okay’d them for use with this specific dog, you could give antihistamines (Piriton).  It is ALWAYS advisable to check that your vet is happy for your dog to have Piriton (or any medication at all come to that), rather than to just assume it is fine. You need to be sure it won’t contraindicate with any medication the dog may already be taking, or any medical history that would be dangerous for him.

There are a couple of things you could try to help the episode pass.  One such technique is putting your finger across the front of the nostrils.  This works because as the dog breathes in, it sucks air inwards and seems to counteract the spasm which stops the reverse sneezing.

You can also try massaging the throat while the episode is ongoing which can, in some cases, halt the sneezing and gagging.

You can try gently blowing the dog in the face (please make sure this is something that would not distress your dog and cause him to snap at you).  This technique is thought to startle them into taking a big suck of air which again will counteract the spasm.

Taking them out into cool fresh air has been seen to be beneficial as well.

As a rule, reverse sneezing is not dangerous or of concern, unless it is actually more of a honking sound you are hearing which can suggest a collapse of the larynx instead.

If you are at all worried or unsure if your dog is exhibiting reverse sneezing, or if it may actually be something more serious as denoted by “honking”, then of course the first thing is always to speak to your vet, but in the absence of any other problems such as heart disease, I wouldn’t be worried about it. You won’t hurt your dog if you do the finger across the nostrils trick and, in most cases, that is enough to stop the episode in its tracks.