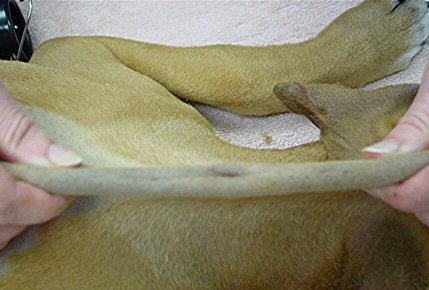 As a puppy grows in the mother’s womb, there is a connection between the puppy’s skin and the spinal cord.  This connection separates during the embryonic stage and the tract is closed off.  This is what SHOULD happen.  With a dermoid sinus, however, this separation from the skin does not fully take place and the tract may either remain connecting the skin to the spinal cord, on occasion actually wrapping itself right around the spinal ligaments, or perhaps the tract does not travel the full way to the cord and instead ends in a blind sac (this version of the defect is slightly less dangerous to remove).  Until the puppy actually goes to theatre, it is impossible to tell the full extent and severity of the sinus.

If you were to look inside the sinus or “tract” as it is often referred, you would find a similar construction to that of the surface of the skin ie hair follicles, sebaceous glands and sweat glands too.  Because of this, the tract is designed to drain itself removing any debris but should this get blocked, it is very easy for the tract to become infected.  This is very serious indeed as it can cause meningitis and in some cases myelitis, which is an infection of the spinal cord itself.  Obviously, such infections can be life-threatening and the dog may experience spinal pain, rigidity and high fever.

Breeds known to be affected include my own particular fancy, the Rhodesian Ridgeback and the Thai Ridgeback.  That said, please don’t think that only “ridged” dogs can suffer with this condition.  Not only can it appear in “ridgeless” Ridgebacks, but it has also been known to affect other breeds including the Kerry Blue, the Shih Tzu and the Boxer (and some cats too!)

Some people believe that this condition involves many genes to bring it about.  Others lean more toward the idea that the genes need to be carried by both parents in order for the condition to occur.  Regardless which theory is correct, in view of the hereditary nature of dermoid sinus it is generally accepted that no animal who has this condition or carries the gene for it should be entered into a breeding programme.

So, what does a DS look like?  How do you detect one and if you find one, what should be done?

Well, DS can appear anywhere at all through the length of the spine from the top of the head, either side of the midline between the ears on the top of the skull and all the way down to the bottom of the tail. Due to tight skin, it has been recommended in cases that the tail be shaved. Tails are very hard to check and the DS point appears as a black dot. Many experienced Ridgeback people advocate shaving a pup’s tail to check for DS.  It very soon grows back and it might just make the difference between finding a bizarly located DS or not.

On very rare occasions it has been detected behind the ear, under the ear towards the jaw and even on the front of the neck, but these are few and far between in comparison.  However, it is worth mentioning one such DS which was indeed finally located just behind the ear.  The puppy in question was lame at around 3 months old.  After various trips back and forwards over the next couple of months with deterioration in the puppy’s lameness and nothing visible on x-ray, it was finally decided to take the dog for surgery.  Once in theatre, a Dermoid Sinus was found which had grown from behind the ear, all the way down and wrapped itself around the entire joint of the shoulder, resulting in the lameness.  This was a possibility that had never even entered the list of possibilities for lameness but several months on was nonetheless confirmed to be the cause, so odd locations are certainly worth baring in mind when checking for this condition.

It can appear as a single lump, or multiple lumps, anywhere on that dorsal midline.  In breeds such as the Rhodesian Ridgeback where such a condition is known be a possibility, a good breeder will make sure that the bitch is given folic acid for at least a month before she is mated and then for the whole of her first trimester of pregnancy as research has shown this supplement to help reduce the incidence of this defect occuring.  The pups, when born, will be checked two or even three times before they go off to their new homes to make sure that no sinus is present.  If it is, this will be assessed to elicit the severity of the DS and then most likely operated on generally at between 12-14 weeks of age.  The puppy will then be “endorsed” which means that the breeder will put a stipulation on the puppy’s pedigree to say that it should never be bred from and it will be sold as a pet only, with the cost of the puppy reflecting only what has been necessary to rear it.

When the subject was presented by a member of the School of Veterinary Medicine from University College, Dublin, the description used was ” its like searching blind with finger tips for a thread in a pair of denim jeans”. Most vets will not find it – unless they have been shown how to and what in fact it feels like from a dog with the condition.  It should also be remembered that in new born and early puppy lives the DS is incredibly thin. Only in later months and particularly for bitches during a season will an undetected DS manifest itself as a damp spot anywhere from occiput to root of tail.

If the puppy DOES NOT come from an experienced and well respected breeder – say perhaps from an accidental mating, a less knowledgeable source or a puppy farm for example, there is a good chance that the breeder may not have looked for this defect and even if they have, due to inexperience, it may well go undetected.  As this is such a rare condition, there are cases where even a vet may miss the detection of it having never seen one before – another good reason to get your puppy from somebody who really knows their breed and knows what they are looking for.  It might not be until months or years down the line that the sinus becomes blocked and/or infected and then the problem rears it’s head, often with life-threatening results.

At first, the problem may appear as a small lump.  Perhaps it could be mistaken for an insect bite or a cyst resulting from rough play with the pack.  You may notice a small “puncture” on the cyst or even two or three, leading you to think that it is indeed an insect bite.  In the case of DS, the tract may become so infected that it swells up massively with little or no improvement from the use of antibiotics.  At this stage, surgical intervention as quickly as possible is the only option.

So is there anyway that you could detect a dermoid sinus for yourself if you have the worry that this may not have been picked up?

Checking for DS
It is important to check from the nobbly bump on the back of the skull, right down to the tail along the midline of the dog.  Support the puppy in one hand and take the dog by the scruff with your thumb and forefinger.  Carefully pull the skin upwards towards the nose and then downwards towards the tail.  Make sure you pull the flesh but do not move your hand.  If there is a DS present, it may show itself as a “dimple” in the flesh where the connective tissue pulls against the skin:

As you gently pull the flesh up or down, you may be able to feel the sinus slip through your fingers and feel like a noodle attached from the skin to the spinal cord or possibly a thinner, small string-like structure. Systematically, move your examining point down the entire length of the midline repeating the procedure over and over.  When you arrive at the tail, it may be too difficult to hold enough skin to check in which case simply pushing the flesh to one side and the other, and up and down, should have the same effect.  If it is a very short DS in the tail area, you may simply find that the skin remains in situ and doesn’t move at all.

Here is a brilliant video from Ridgeback Rescue, starring Julian Norton the Yorkshire Vet, to demonstrate how to detect a DS for yourself.  If you have concerns that your dog may indeed have a DS, then perhaps try this technique for yourself, but certainly head to your vet with your concerns.  Ask them if they have dealt with Dermoid Sinus before and, if not, if they could refer you to a veterinarian who has.

Please bare in mind that if a dog has previously been diagnosed with a dermoid sinus, it is advisable that injections or microchipping in that area, at the top of the neck or the shoulders should be avoided, and instead placed slightly to the side.  Occasionally, reactions of such injections can cause a swelling which looks very similar to DS.

Below are some pictures of the resulting surgery required to treat a DS that went un-noticed.  This lovely girl was the result of an accidental mating, but she had been checked over by the vet at 8 weeks old.  As this condition is quite rare, it is likely that the vet concerned had never actually come across it in reality and sadly it was missed. By the time she was about 16 months old, her owner discovered a lump that was initially thought to be an abscess.  Many antibiotics and pain killers later, she was taken to theatre for exploratory surgery when a very nasty DS was found, removed and treated.  I am very relieved to say that she has made an excellent recovery, and her outlook though very worrying for a time, is now absolutely excellent.  The pictures were taken at weekly intervals following surgery.

Often, by about day 5-6 after surgery, there may be increased swelling as fluid builds up at the wound site and around the neck.  In some cases, it is necessary to insert drains into the site at the time of surgery to help with the safe drainage of fluids, although some vets prefer to put up with a “lumpy neck” for a week or so in the belief that the fluid will be reabsorbed by the body naturally and prove better for healing in the long-term.

* The bottom line with this awful condition is to be aware.
* Know your breed and any possible problems associated with it.
* Check that your vet knows what he is looking for when bringing your puppy home.
* Get your puppy from a breeder who has done all the relevant health checks and KNOWS THEIR ONIONS!!!

Thank you to Pete, Claire & Ann-Louise for allowing me to use the photographs
of your beautiful dogs.  I wish them all very well and know they have an excellent future ahead with such smashing owners 😉