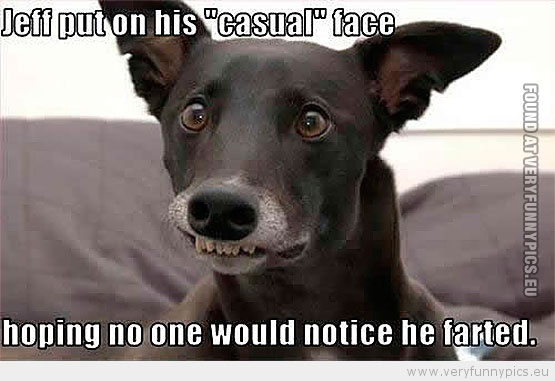 Flatulence (Farting!) – All dogs suffer with excessive wind or “gas” from time to time, just like humans do.  For the most part it’s a bit whiffy, funny or possibly even embarrassing but generally, all part and parcel of living with a dog.  I’m sure most of us would simply open a window or add a quick squirt of air freshener to combat it.

So, what is flatulence? Well, just as with us, when food in the gut is digested, it produces gas naturally.  This gas accumulates until finally it has to be expelled to relieve that bloated feeling in the abdomen – hence the “fart” (sometimes noisy like a motorbike and sometimes what my son refers to as the S.B.D. – silent but deadly!)

There are several causes of flatulence from feeding things that you know will cause it (you KNOW baked beans or sprouts are a pretty explosive food stuffs for you and if you feed them to your dog you can expect the same outcome), to feeding poorer quality dog foods and foods not really designed for our dogs.  The amount of excess gas they suffer can also be, in part, down to the way your dog eats.  If you have a “gulper” who swallows air with every mouthful, it stands to reason that the extra air he has consumed will need to come out somewhere!

Each dog will suffer with flatulence to varying degrees and some may get it excessively.  If you feel that your dog has been more smelly than normal, or been this way for a prolonged length of time, please check with your vet to make sure that nothing more serious is going on.

So, is there anything we can do to help our Furry Farticus?

Firstly, lets look at his level of exercise.  Does he get plenty?  A well exercised dog generally produces a lot less wind at home.  Exercise helps the digestive tract to work and move freely.  A good transition through the gut while they’re out will result in much of their excess gas being expelled out in the fresh air, rather than in your home.

I‘m sure you’ve noticed how many people go for a nice walk in the fresh air after their Christmas lunch.  There is no coincidence that after a large meal, stuffed with sprouts and other veg, many of us find that a brisk walk is the best way move things along and prevent that bloated feeling.

Another good tip is to always feed the best quality dog food you can afford, whether that’s a raw diet you put together yourself, a processed raw food or even kibble.  Always check on the packaging – the better the quality of the ingredients, the better he’ll feel on the inside and the better he’ll look on the outside.  We all like a naughty take-out now and again, but think how you’d feel if that was all you ever ate? Sluggish, poor skin, slow digestion and generally out of sorts with yourself.

If your dog does hoover up his food quickly with huge gulps of air, there are a couple of things you can try in order to reduce this.  Firstly, there are specific dishes you can buy with nobbles in the bottom which makes it more difficult for your dog to wolf down his dinner.  By slowing him up, you also reduce the amount of gulping and hence the amount of air he swallows.

If you don’t want to go to the expense of buying a specially designed product for this, you can always just use an up-turned bowl or ramekin in the bottom of the dog’s bowl.  He will then have to eat around the ramekin, pushing it out of the way to get to his food, which will have exactly the same outcome – much slower eating.

You might also try splitting his meals into smaller portions.  For example, if you usually feed at supper time, try giving half his daily allowance at breakfast and the other half at supper – in really bad cases you might even try splitting it into three.  Smaller portions, little and often, will produce less gas build up for him, and less pong for you!

Try giving a charcoal biscuit a couple of times a day.  The charcoal will filter the gasses in the gut and “neutralise” them.  While charcoal will likely not reduce the amount of wind, it will certainly make it sweeter on your nostrils!

Another thing to try is giving a spoonful of natural yoghurt after their meal.  Apart from the obvious benefits of the calcium, natural yoghurt also aids digestion due to its probiotic properties.  Assisting the digestion in this way can also reduce the build up of gas.

If all else fails ………. JUST DON’T LIGHT A MATCH