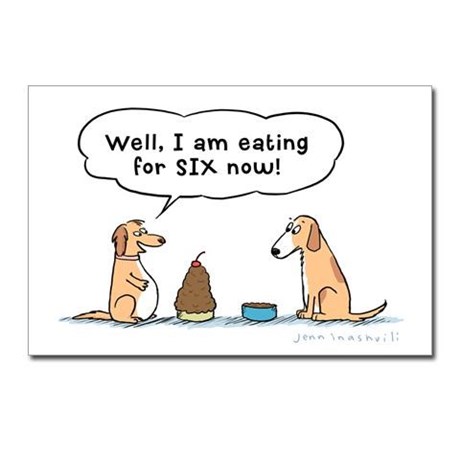 Sometimes a bitch may appear to be pregnant, but then not produce any puppies.  This can be something that is referred to as a false or “Phantom” pregnancy.

As we mentioned yesterday, a bitch’s cycle is split into four parts and a Phantom pregnancy can result after the phase where she ovulates.  Hormonal changes occur at this time and, if she does not fall pregnant, these changes can mimic the appearance of a pregnancy when in fact none exists.  While this condition is fairly common in many bitches and is considered a normal phenomenon, it can cause some really marked symptoms which make the bitch very unsettled and can worry her owner too.

The changes we see are likely to start several weeks following the ovulation part of her cycle and they can continue for several months.  Some bitches do seem very prone to Phantom pregnancies with them occurring after each of their seasons when they have not been mated.  So, what symptoms are we looking for to alert us that a Phantom may be taking place?

* Nest Building is often seen at the outset of the Phantom

* She may appear skittish and nervous, being spooked by things that normally cause no problems at all.

* Her levels of obedience may seem off as if she is just listening to you and being naughty.

* Often the bitch may decide that one of her toys, usually a furry one but not always, is her “baby”.  She will treat it as if she truly believes it to be a puppy and will therefore become very possessive of it.

* Physically, her teats will begin to swell and the mammary glands will fill with milk in readiness for her to feed her “baby”.

* She may show uncharacteristic temperament changes such as aggressiveness, loss of appetite, restlessness or lethargy.

* In very rare cases, there may even be symptoms suggestive of whelping itself.

Treatment:
In mild cases, it is not really necessary to give any specific treatment at all, save the patience and understanding she may need.  It is said that simply keeping her exercise levels up and her brain engaged will be of great assistance in getting her through it.

However, with more severe cases various drugs can be administered to help such as those which will encourage the milk to dry up or even those which prevent the bitch from coming into season in the first place.  These drugs will stop the season and, in particular, the ovulation part of the cycle, and hence the hormone fluctuation will be diminished.

Another option is to have the bitch spayed.  Spaying can be done as an open surgery where the ovaries and uterus are removed, or even in some cases as a “keyhole” procedure which is a less invasive surgery and is said to have a faster recovery time.  Which procedure is best for your bitch should be discussed with your vet.

It is important to remember that spaying of a bitch cannot be carried out while a Phantom pregnancy is on-going as this would likely cause the signs of the false pregnancy to continue even after the surgery.