Dremel – introducing a puppy to a nail grinder 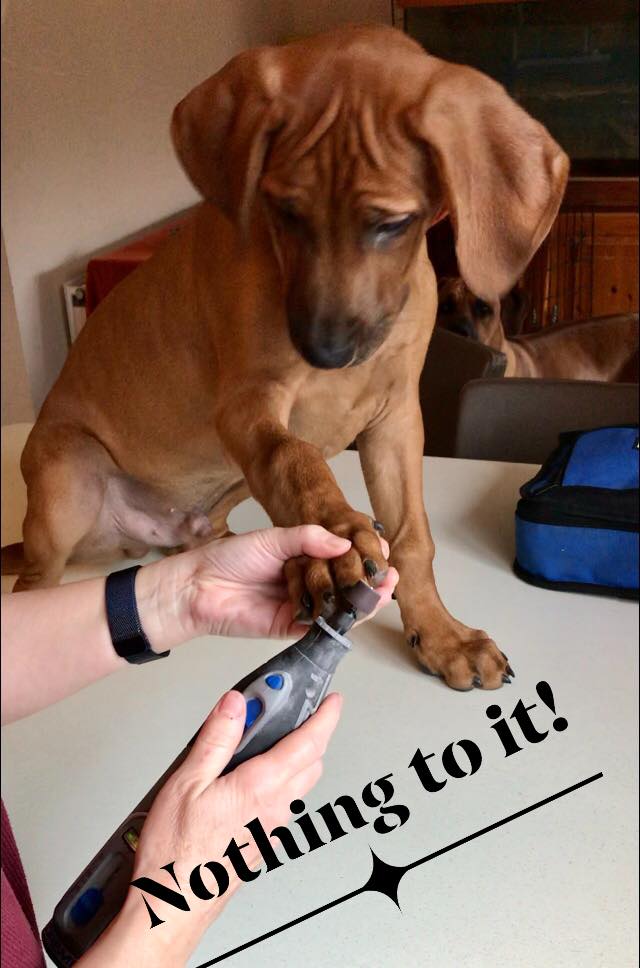 Dremel – introducing a puppy to a nail grinder

Yesterday, Coda turned 13 weeks.  At the moment, every day is a new and exciting adventure.  We are looking to socialise him and introduce him to as many positive people, dogs, venues and experiences as possible in an effort to create a confident, well-rounded, balanced adult dog in the future.
*
Today’s itinerary was a fun-packed, full day – well, if they aren’t enjoying it, they won’t want to repeat any of it will they!  We covered our usual morning obedience training session combined with a bit of ring craft for when he is ready to hit the dog shows (when they eventually start again after Covid).  He had a nap in his crate while we nipped out to the tip – not because we couldn’t have taken him too, but because it’s essential he learns to spend time alone to avoid separation anxiety in the future.  We also had a quick spin the car for our weekly trip to the vet for a weigh in.  This gets him used to the car, the vet’s office, the vet staff and getting on and off the scales confidently by himself.  Today, at 13 weeks, he weighed in at 18kg

.  By the time he is full grown, he will be more like 45kg.  It is really important to acclimatise them at this young age to behaviours you are going to need them to perform themselves later in life, when they are too big for you to man-handle – I can’t imagine trying to wrestle a Ridgeback as big as me onto the scales!
*
When we came back, and just before his afternoon nap to ensure he was more relaxed, it was time for his first introduction to the Dremel, which he totally aced.  The Dremel is a hand-held grinding tool which I use to trim their nails.  Many people use clippers but, with such large, strong nails that Ridgebacks develop quickly, I prefer to use a grinder. The grinder can be very scary for any dog, never mind a puppy, so it’s important that you introduce them to it KINDLY, GENTLY, CALMLY and with masses of TREAT REWARDS.  Please remember that a puppy has very tiny, delicate nails, so the teeniest touch is more than enough, and only for an absolute split second.  We do not want hurt puppy, grind too much or too long and damage the nail, so literally only the tiniest pointy tip should be touched.
*
(N.B. For the last week, prior to today’s session, Coda has been introduced to my electric toothbrush, without the brush on, in the morning and at bed time to get him used to a vibration feel and sound on a couple of nails at a time … all with lots of treats, ready to move forward to meeting the real thing today.  I also spend at least 1 minute every single morning examining him – ears, eyes, teeth, mouth, tail, paws and pads.  This means when he needs to be checked over for a medical purpose, we won’t have a fight.  It also means, because the examination includes checking every single toe on each paw, he is quite happy with me handling his paws already, perfect for when we come to Dremel the nails too).
*
So how did it go?
*
Well, to start with, I simply held it up and let him investigate it. 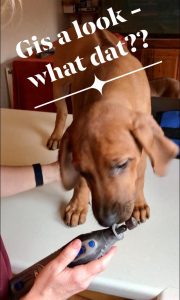 Next, I turned it on to a REALLY LOW and SLOW SPEED.

With him standing, foot on the floor, I touched the tip of one nail, for a split second, then turned it off and rewarded him. 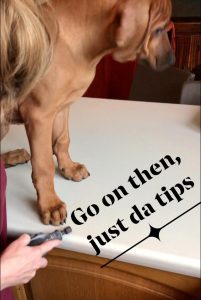 Turned it on again, touched a tip, turned it off, rewarded.
Next I held a paw in one hand, and touched briefly on a nail to get him used to being handled and touched by the Dremel at the same time. 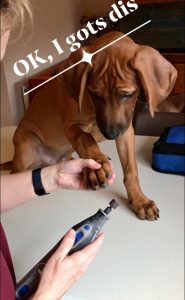 Next I turned on the Dremel and touched a nail while holding the paw, just on the tip. 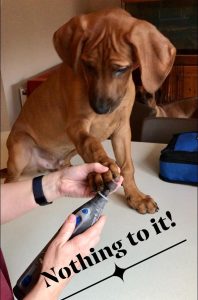 Finally, I turned the paw over and touched the under side. 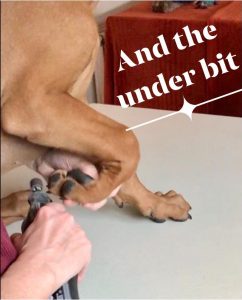 This was his first go and I was thrilled that we managed to file the nails of a couple of paws without any trouble at all. What an amazing little puppy!!

Obviously a squillion treat reward prizes were administered and nails were touched for the tiniest amount of time due to his teeny tiny nails but I couldn’t be prouder of how he behaved.  No fear, just excitement

Be kind
Be gentle
Be calm