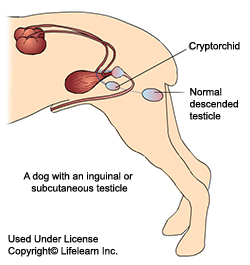 Undescended Testicles is also known as Cryptorchidism.
When a male puppy is born, his testicles will still be within his abdomen.  As he developes and grows, they will slowly start to “descend” down the tubes until they arrive at their permanent place in his scrotum.  It is important for mammals to be able to keep their sperm cool and this is why the testicles sit in the scrotum outside of the body rather than remaining inside the abdomen where the temperature would be much higher.

Sometimes, owners may notice that their new puppy has just the one, or possibly no testicles at all in the scrotum.  Each dog is different and the testicles of different dogs do descend at different rates although as a rule, both testicles are usually to be found within the scrotum by the time the animal is six weeks of age – and certainly we would be expecting them to be there by eight to ten weeks).If one or both testicles are not present in the scrotum by twelve weeks of age, the likelihood is that they probably never will be.  This is what is referred to as cryptorchidism or ‘retained testicles.’  This disorder can be hereditary and may well be passed from generation to generation.

Unless you specifically go looking to see if both testicles have arrived, it is unlikely you would notice.  The dog will show no signs or abnormalities because of his condition.  Things like their energy levels, behaviour and growth pattern are unlikely to be affected and while it is possible that their fertility levels may be reduced, if the dog has one testicle in the scrotum it may still be possible for him to be a father.  (Because this condition is often genetic, it is advisble that such dogs should not be bred from, especially as dogs with retained testicles may have a higher risk of testicular diseases such as cancer and torsion).

If your dog has undescended testicles, what should you do?

It is strongly recommended that you neuter your dog if one or both of his testicles have not come down into the scrotum.  Neutering is not only to prevent passing on this genetic problem to future offspring, but also to protect the dog from possible testicular diseases in the future, as mentioned above.