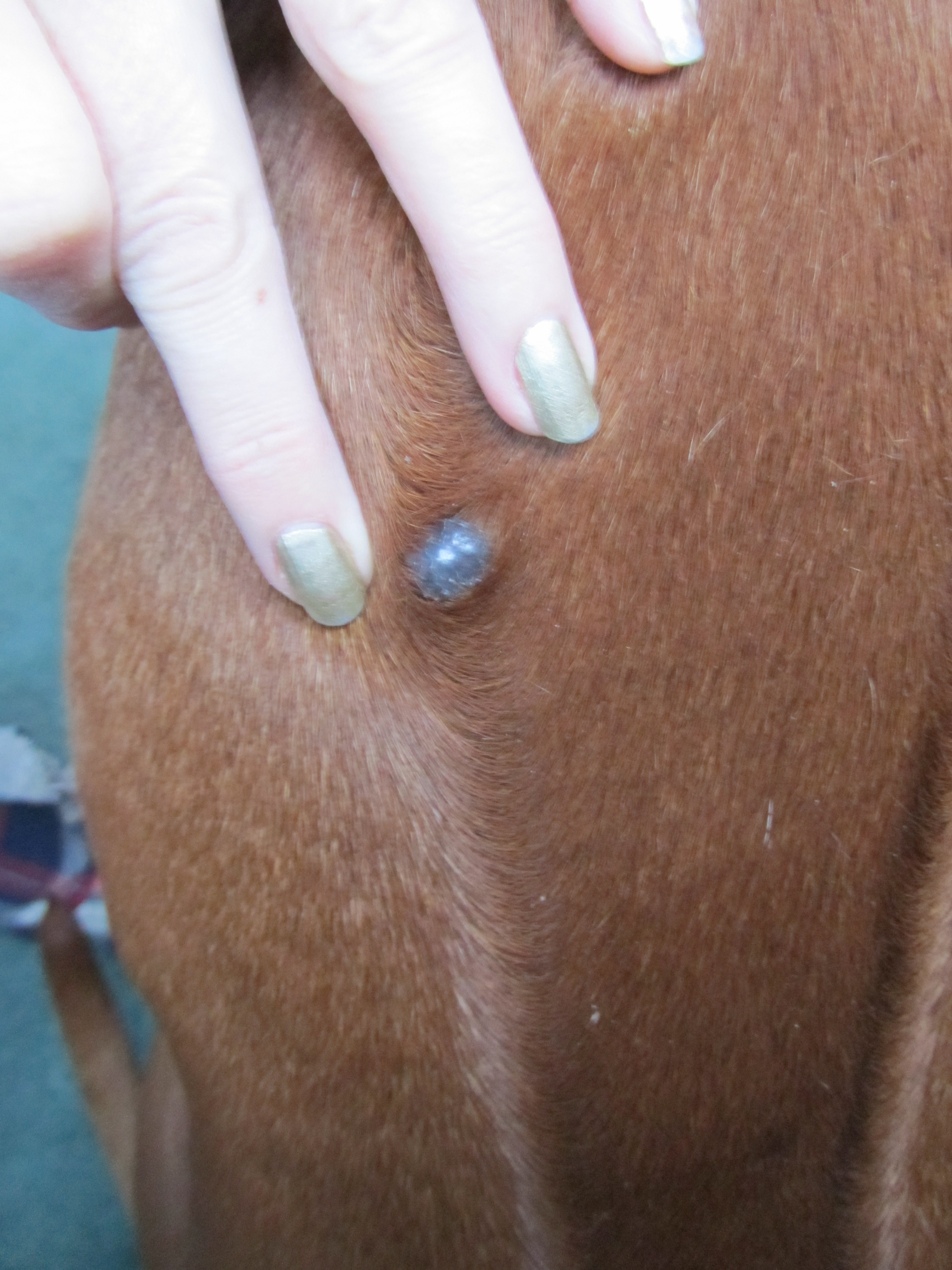 Tumours, Lumps & Bumps – When you notice a lump on your dog, it’s very scary.  You instantly start thinking the worst as to what it could be, how long has it been there and whether you should have noticed it sooner.  The important thing is that now you HAVE noticed it, you need to keep an eye on it to determine whether it is changing at all (be that in colour, shape, size or texture).

Axl, our fabulous demonstration dog had a tumour scare at the very beginning of 2013.  I had no idea what the lump was, and was obviously just as worried as you would be, but I decided to document his investigations and outcome in a timeline in the hopes that our Rhodes 2 Safety followers might be able to gain something positive from his experience – regardless how it turned out in the end.

In this blog, I’ve also added some tips on keeping a record of the progress of the lump and the kind of things that separates benign (non-cancerous) tumours from the nasty malignant (cancerous) ones.  As always, if you are worried that the lump your dog has is a “nasty”, then your vet is the best person to check with as soon as possible.

I will say here and now that all is well with Axl and my big fella is now back to all his usual work, breed shows and agility competitions again.

1st January, 2013 – “Axl has developed a new, warty, lumpy, moley “thing” (pictured below).  Why do these things always turn up out of hours, on weekends or on bank holidays?  Anyway, I’ll be off to the vet with Axl tomorrow morning and will report back with the vet’s opinion – wish us luck”

Monitoring a skin lump:-
Use a ruler or tape measure to put an actual figure to the dimensions of the lump.  You can also take a photograph (as I did above, with something along side the lump to give scale – you can see my finger next to the lump so its easy to tell if its getting bigger or shrinking) or sketch out the shape, noting any features on the surface of the lump such as colour, bobbly bits or indentations.

Be sure only to check it every few days, or every week, as if you check it too frequently you can miss slow growing changes or the anxiety can make you imagine lumps are growing when they are not.

When checking, refer back to your notes, sketch or photograph so you have a firm target to compare to.

Most cases of lumps like these turn out to be benign. If monitored lumps appear to be growing, most vets will opt to remove them unless anaesthesia poses special risks for the individual patient (perhaps if they are old, overweight or have breathing difficulties)

Some features of BENIGN (non-dangerous) tumours:-
* Appear and grow slowly
* Loose & moveable
* Appearance stays the same
* Well demarcated edges (clearly defined)
* Do not spread other than locally
* Do not re-grow after surgical removal

Some features of MALIGNANT (dangerous) tumours:-
* May appear and grow more quickly
* Fixed to underlying or surrounding tissues
* Change in appearance
* Poorly demarcated edges
* Can spread and cause disease in other areas of the body
* May re-grow after surgical removal

20th January, 2013 – am  I kept a close eye on Axl’s lump and it turned from what looked exactly like a small, cream coloured tick on New Year’s Day, into this speckled charcoal-coloured lump within 18 days – note the change in size and colour.

On 20th January – pm, Axl was shaved from crown to crown across his ridge and had his lump removed some 18 days after it appeared.  The scar was pretty neat.

The histological findings of the lump took 5 days to come through and diagnosed it as a benign trichoepithelioma (ie a non-cancerous tumour within his hair follicle) – and three weeks later, his stitches were removed leaving us with this on 10th February.

20th April, 2013 – After 3 months, apart from a slight change in the direction of his hair growth, all evidence of the worry he put us through has now disappeared.  He has been back in the show ring since and, as the change in hairgrowth is down to surgery rather than a natural genetic fault, it has made no difference to his show career at all.

Scary as lumps are, they aren’t necessarily a death sentence and the sooner you have them checked out by a qualified professional, the better your dog’s chances of getting over them.  Here is a brilliant article written by a vet for the website theveterinaryexpert.com.  It explains exactly what happens when biopsies are taken, the reasons they are necessary and what information can be gained from them.  Its well worth a read if you find yourself in this position as sometimes the not knowing is more scary that the information itself.