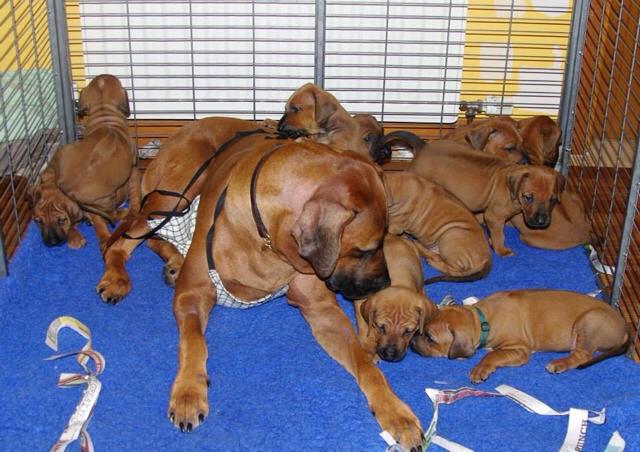 I get many emails and messages every week, but by far one of the most common subjects is that of Phantom Pregnancies in Dogs.  If you have a bitch who has not been spayed, the chances are you will know exactly what I’m talking about.  Hormone changes and surges can play havoc with your darling girl and is sometimes really had to live with and watch them go through (it is one of the reasons I choose to only have boys in my pack … our home is only big enough for one “bitch” I’m afraid, and that role is already taken 😉 lol).

I have already written a blog about bitches and their cycles Bitches, Cycles & Seasons

We never, however, stop learning, and reading other opinions on various subjects.  With that in mind, the following article was written by Shelby Gottschalk of Dr. Dobias Natural Healing and I think does sum up what’s going on in a Phantom.

You might know about pregnancy in dogs, their habits and nutrition needs. But, did you know that dogs can actually have all of the symptoms… without actually being pregnant?

Phantom Pregnancy, or Pseudopregnancy, in dogs can actually be common after a heat cycle and occur at any age. Whether or not the dog has access to a mate does not matter, as the dog is not actually pregnant. Ernest Ward, DVM stated in an article for VCA’s website: “The majority of intact female dogs will show some signs of false pregnancy after an oestrus cycle.”

What Happens During Phantom Pregnancies

Research shows that symptoms will arise around four to nine weeks after the last heat cycle.

A few signs of phantom pregnancy can include:

Why Does This Happen?

When your female dog has a heat cycle, her ovaries will produce hormones whether she is childbearing or otherwise. This is similar to female humans who produce hormones when they are are having their monthly cycle. In dogs, these prepare the uterus to hold their pup. If your dog is truly pregnant, the hormones will continue to go through the pregnancy cycle until shortly before the puppies are born.

If she is not pregnant, the hormones decrease within 4-6 weeks. Just like if she was actually

pregnant, the first stages will produce those hormones that cause her to mimic pregnancy. This is the stage where she might show the symptoms listed above.

The hormones will gradually decline and let the body know that she is not actually pregnant. There is still no official known cause as to why they obtain these hormonal changes, but we can expect it and be prepared!

Mild cases of Phantom Pregnancy do not require treatment and should resolve themselves around 3 weeks time.

If symptoms seem severe, speak with your veterinarian and hormonal medications can be an option, such as those that prohibit prolactin.

Omega 3’s can be a good supplement to try for your dog’s nervous system, coat and skin which can sometimes be affected with hormone changes.

Spaying your female dog is another option that will permanently stop her from going into heat, and preventing Phantom Pregnancy before it occurs. This should also be discussed with your veterinarian in further detail. They are more holistic ways of spaying your dog, such as having your vet perform a ovariectomy, which is only removing the ovaries.

Prepare and Be Aware!

If you prepare for your female dog to have a Phantom Pregnancy, you won’t be surprised if the symptoms occur. Being aware is the first step, then making sure that your dog is comfortable and stress free will help ease her symptoms while helping her feel like herself again!