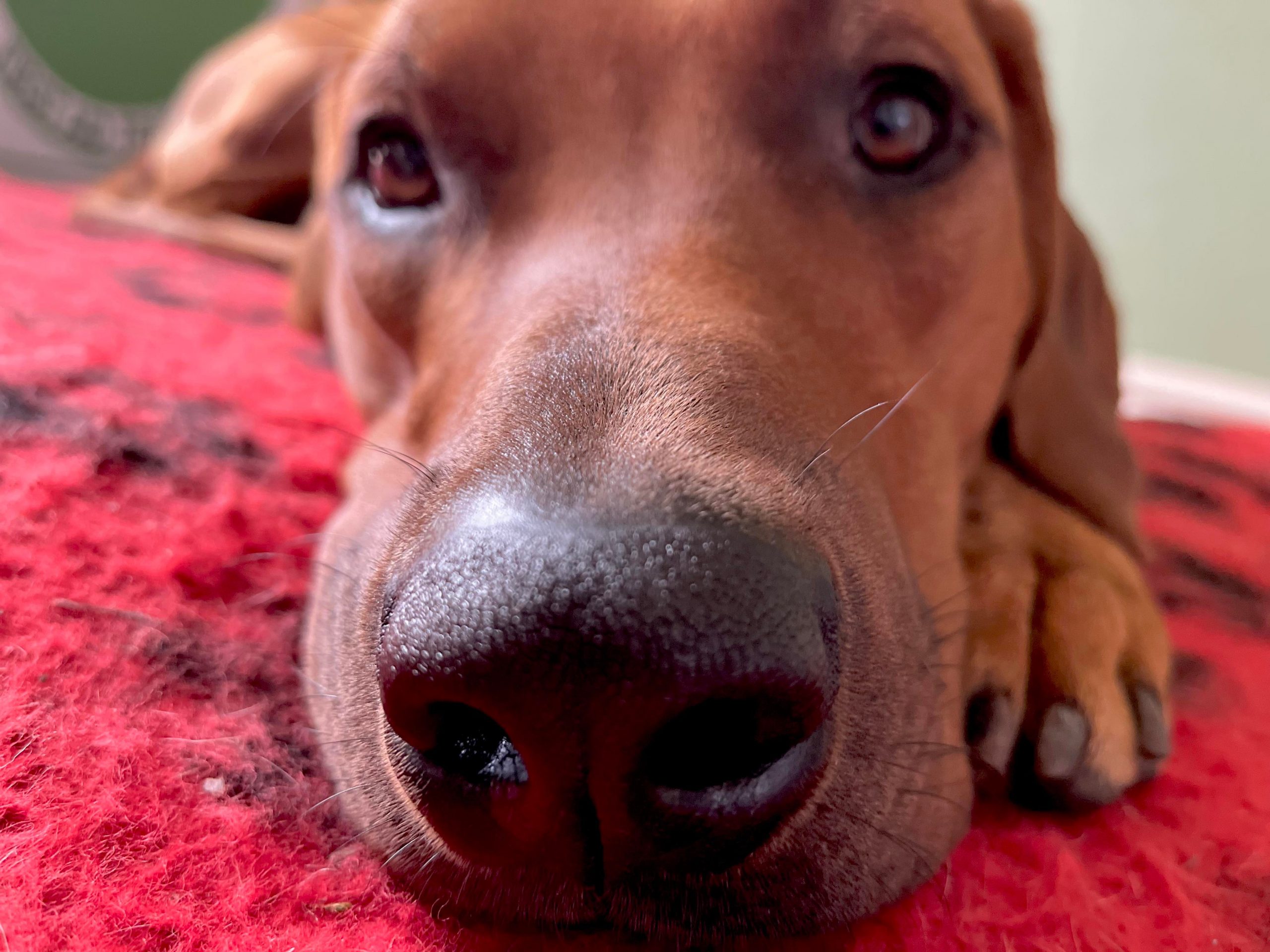 Is your dog constantly licking, pestering, nudging and flirting with your other dog?  Read on.

Dog noses are incredible things – exceptional in fact (though not so much when it is shoved up your derrière unexpectedly in the dark dead of night … but that’s a different story entirely!  Each one is as different and unique as a finger print and Scientists guess the dog’s sense of smell is somewhere between 10,000 to 100,000 times more acute than ours. One of the reasons for a dog’s incredible smelling ability is the number of scent receptors. For every scent receptor a human has, a dog has about 50.

These magnificent, finely tuned bits of kit can smell all sorts of things right down to the very tiniest of changes; cadaver dogs can detect particles of blood, tissue and human scent.  Explosives dogs can scent the specific chemicals that make up the explosive devices in the smallest parts and a drug dog can smell a spliff at a gig from far, far away!  Scent hounds can track scents from missing people or animals that were laid hours and even days previously.   Metabolic chemical changes caused by ailments or medical conditions such as cancers, epilepsy, diabetes etc can be detected by these super-sniffers well before an episode comes to our attention … and we all know how switched on a male Casanova becomes at the very suggestion of a lady in season.

Being attuned to your dog’s behaviour can alert you to things they may be detecting when we would otherwise have no clue that anything sinister is going on, whether that is the sudden interest in a mole on your leg for instance or a constant “over-the-top” attraction to one of your other dogs.  It might be that they have picked up on a hormonal change caused by a cancer.  Some cancers can trigger various glands to elicit hormones that can confuse our dogs and make them think that “sexy times” are on their way, so any of these changes should always be checked out by your vet, just in case they are an early warning sign of something underlying.

A dog may suddenly start behaving as you would expect a male suiter to carry on with an in-season bitch.  They may start licking your other dog compulsively, nudging them forcefully with their nose as if trying to get them to play, play bowing to them in a flirtatious manner, drooling, dribbling and chattering their teeth, obsessively going to lick their pee and savour the flavour through nostrils flaring, lip licking and teeth chattering.  All of these behaviours are exactly what we would expect to see when a bitch’s cycle reaches its height.

BUT, what if your bitch is not in season?  What if your female dog has actually been spayed? What if the dog showing these behaviours is actually a girl, or the target of their affections is a male dog who obviously cannot be in season?  Clearly, these things do not fit and at the appearance of such behaviours, your vet is your first port of call.  But it’s not always something sinister or scary or massively dangerous … sometimes, your dog is simply being confused by the scents he is smelling.  Sometimes, it can just be your other dog’s anal glands that are throwing him off kilter.

We have been through exactly this with Rain and Dice.  About 9 months ago now, Dice began compulsively licking Rain and was entirely obsessed with him 24/7, just as I’ve described above. Dice was 2.5 years old and very much hitting his sexual prime and maturity.  As an entire male, we assumed that perhaps there was a bitch in season around the local neighbourhood and this was triggering Dice’s behaviours.  He was HORRIBLE!  I love him dearly with all my heart but over the course of that six months, he was incredibly difficult to live with; wouldn’t listen, wouldn’t eat, wouldn’t sleep, wouldn’t recall, wouldn’t walk on his lead, couldn’t concentrate on anything other than sniffing for girls and wouldn’t leave Rain alone for one minute.  It was exhausting.  We even considered having him castrated such was the severity of his hormonal behaviours – having had 7 male dogs up to now, I have NEVER had a dog who has reacted so “off the scale”.

Rain is now 12.5 year old.  He is lumpy, bumpy, moley and you could pretty much read him like a Braille textbook.  By this age, lumps and tumours are to be expected and while normally I would have them checked, biopsied and removed, by 12 years old he had so many that anaesthetising him and cutting them all off every time would leave me with nothing but a moth-eaten old hearthrug rather than a Ridgeback, so we decided to just leave him be and enjoy his golden years without further prodding and poking … but in the back of my mind, I was sure one of these tumours was quite probably responsible and made me wonder what else may be going on inside him.

After 6 months of Mr “lets-get-jiggy-with-it” carrying on and tormenting us all, it suddenly stopped.  He got over it within a week and was totally back to normal.  How very odd!  Not that I was disappointed you understand, but I was very confused.  Anyway, we took the change in behaviour as a win and got back to enjoying our boys.

Scroll forwards another 4 months and oh my goodness, it was all starting again … but this time, Coda was doing it too … and this time, even worse than Dice was.  Poor old Rain was the target of both of their affections.  They treated him like a lollypop with their constant licking and nudging and flirting.  The poor boy was exhausted with their obsessive attention and you could see his nerves were becoming shot with the whole thing.  I returned to the vet and asked again if he thought something sinister with Rain was going on that could be causing these behavioural changes.  He thought probably yes, but as it was a cyclical thing, it really was a bit of a head-scratcher…. and then I got to thinking.  I was sure I’d read somewhere that odours from anal glands can, on occasion, confuse a dog’s nose.

I took Rain outside alone and checked his bum.  Glove on, kitchen paper and antimicrobial spray at the ready …. Right gland, nothing.  Completely fine.  Small and in no way swollen or uncomfortable.  Swap hands and try again.  Left gland … the size of a grape, quite hard and tight to the touch – definitely NOT empty.  I squeezed the gland and very easily a squirt of exudate rushed out into the kitchen paper.  It was thicker than it should have been and, while not actually infected, it certainly was not as clear in colour as it should have been and boy, did it whiff!  I made sure the gland was completely empty and gave his bum a complete spray, clean and polish to get rid of any remaining odours and then we went back indoors.

Nothing.
No licking.
No sniffing.
No nudging AT ALL

In fact, neither Dice nor Coda took any notice of Rain the moment he stepped back in the door and, save the odd lick or cuddle that I would expect from a pack member on a normal day, all unwanted advances literally stopped right then and there.  One week on, it’s like the problem never existed and a harmonious pack dynamic has returned to Chez Metalrock.

After 40 years of owning dogs, this wasn’t something I’d come across before but as with anything, these anecdotes are always worth a share.  If your dog starts sniffing and licking and carrying on then yes, there is a real chance of something serious and your vet should definitely be consulted but you never know.  Sometimes, it can simply be nothing more sinister than a misinterpreted case of fish-bum!